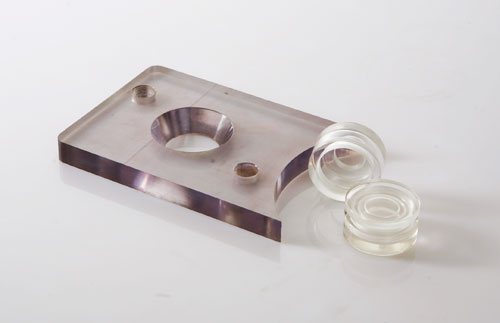 In terms of optical property, it is extremely transparent and visible lights almost completely pass through it. It is stable for weak acids, strong acids, weak alkali, and inorganic salts. Although it is soluble in organic solvents such as strong alkali, invaded daketon, ester, aromatic hydrocarbons, etc. but not in alcohol, espresso, or ether. Acrylic polymers have a particular pattern, and it is a kind of chains of molecules in which the same shape of molecules are constantly connected. However, the molecular structure of acrylic is very simple and hard, and so it is more easily cracked than plastics, in which longish and flexible molecules are connected. In other words, it is hard, but its impact strength is low. The kind of acrylics which appeared first was acrylic polymethyl acrylate, which was discovered by a Swiss chemist, George Karl Baum, in 1880. In 1927, a company called Rohm & Haas began to produce it commercially in order to make safety glass. Since then, Roland Hill and John Crawford from a company called Imperial Chemical Industries studied and released PMMA (Polymethyl methacrylate) by the trademark PerspexTM. Rohm & Haas tried to make safety glass by the polymerizing MMA (Methyl methacrylate) between two sheets of glass, and the transparent polymer obtained here was sold by the brand name PlexiglasTM. In the mean time, a U.S. chemical company, DuPont, also entered the acrylic flat sheet market with a brand named Lucite TM. Acrylics were utilized in earnest during World War II and, during the late 1940s and the early 1950s, when the war was over, established itself as an advertising material.

It is colorless and highly transparent. The colorlessness and transparency of the colorless acrylic resin is highest among existing plastics. The injection plate that has the highest transparency of all acrylic resins allows light to fully pass the thickness of more than 2m. Light transmittance rate is more than 90 percent, which is an excellent permeableness and it is non-toxic to human body. Acrylic resin does not contain toxic substances for people and livestock, and so it is widely used for dentures, dental fillings, artificial eyes and bones, etc. that involve human body in addition to utensils, etc. It has a very rich range of colors and has an excellent surface condition.  As injected acrylic resin plate is polymerized on the surface of colorless glass, the surface has an excellent angle straightness, and a complete mirror state is obtained. It is lightweight and strong. Specific gravity is 1.19, which is about a half of inorganic glass. Its toughness is comparable to that of tempered inorganic glass. The electrical properties can be sharply affected by the absorption of humidity. Its resistance to arcing is excellent. It is electrostatic which can spoil its appearance. This drawback can be corrected by using ant-static products. Thermal properties: PMMA is combustible and burns without producing an excessive amount of smoke. Its retraction when molded is small as for uncrystallized polymers. As its coefficient of linear expansion is very different from that of metals and its elasticity low, it is not advisable to use metal inserts in a part made of injected acrylic resin. The maximum operating temperature is low. It is suitable for both vacuum-applied metallization and silk-screening. Its high viscosity in the melted state requires high injection pressures. The machining is easy provided that shock and overheating is avoided. As solvent glues release stresses, parts must be annealed. It is easily glued either with pure solvents or with acrylic resin dissolved in a solvent.